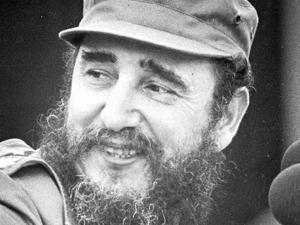 Weapons can kill the hungry, the sick, the ignorants. But cannot kill hunger, sickness and ignorance “Fidel’s speech at U.N. Fidel has been leader Maximo of Cuba since 1959, when he arrived to Cuba with a small boat and few friends to start one of the most spectacular guerrilla revolutions. “Hasta siempre comandante” was originally written for Fidel’s revolutionary companion, Che Guevara. When he was a young boy Che, who lived in Argentina, once told his mother he was going on a trip around sound America with some friends and would be back after s few weeks. Next time Miss Guevara saw his son, he was a government Minister in Cuba. Today “hasta siempre” is for Fidel.

News about Fidel from BBC.