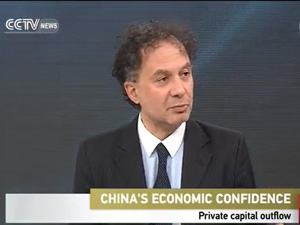 Geraci and Prof Liu Baocheng from University of international business & economics were guests at CCTV Dialogue on 24, December, 2016. The talk mainly concerned Private capital outflow and challenges in the manufacturing sector.

Recent remarks by glass tycoon Cao Dewang about his US plant have sparked a discussion that China is not only losing its manufacturing sector to Southeast Asian countries, but perhaps also to developed economies, like the US. On the other hand, according to statistics, foreign investments has been continuously withdrawing from China in the past few years. Such circumstances make the general public wonder about China’s economic confidence.

While talking about Cao’s comment that the cost for his plant in the US is less than that in China, Geraci said: “It is true that China used to have very strong manufacturing powers, but that was maybe the story of the 80’s or the 90’s. The problem of China is that, as the economy develops, wages go up. In the last few years, the average wage has grown a lot faster than the rest of world. Today, the city worker makes about 60,000 RMB per year, that’s quite a lot. According to reports that measures the relative cost of manufacturing in China versus the cost in the US, China stands at 95% of the cost of the US, with  the US being 100. So basically the cost saving from producing in China is only 5%. There is another problem with China: people mobility is very high. The average factory workers move from one factory to another one just for one extra RMB, so they have a very high worker turnover.”

The main reason why foreign investment in China starts to become weaker is that RMB is now depreciating. If you are a US investor, you have two options: 1) to invest in China in production facilities and sell goods back the US, or 2) to sell to Chinese consumers. If you sell to Chinese consumers, with the RMB going down, you are going to bring back lower dollars. Moreover, despite the narrative that RMB is becoming more international, the reality is that the capital account is actually being closed. We have new restriction implemented just two weeks ago. So people are afraid that the money made in China cannot be easily to re-export it out. China needs to make it clear not only the rules on operations but also the rules on capital repatriation.

The top concern for China is to stabilize the financial system. The west and other emerging markets have had experience of crisis, so China needs to be very careful. China should slow down reforms in the financial markets. For example, the opening up the Shanghai stock exchange, liberalizing the banking sector, liberalizing the interest rate and liberalizing the exchange rate, they all need to slow down. China is going too far too fast. It took the west hundreds years to do it. It is a one way road, once you liberalize it, you can’t go back. I worry that the interest rate in China is artificially kept very low. I know it is higher than US but interest rates should be at the level of GDP. When GDP grows by 6 % or 7 %, interest rate should be 7 %, not 1.75 %. That gap is bubble. Money supply grows faster than GDP in China. If we liberalize interest rates in China, half of the companies will go bankrupt immediately because the cost money will go up.

It is impossible to make the economy grow while maintain its stability. Once we have monetary policy that intends to make the economy grow, it is bad for the re-balancing, because it pushes investment, but we don’t want investment, we want consumption. I think China should lower its economic growth, and changing the narrative. Maybe With 3 % growth in GDP instead of 7 %, we can make the air clean and we can have a better environment. With the current level of income of the middle class, people would be happy to accept to pay a little bit money in exchange for health. 20 years ago you couldn’t tell people to wait 10 years because people were hungry, but now it is different, the reduction of poverty has been very successful.