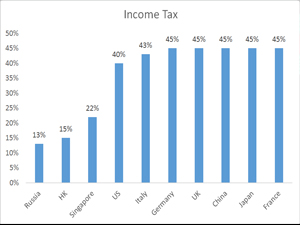 Recent heated discussion over whether China has a high tax rate was initiated by one manufacturing company -Fuyao Glass Industry Group, owned by auto-glass tycoon Cao Dewang – deciding to invest in manufacturing facilities in the US on the argument of lower tax rates than in China. But this argument appears to be contradicted by statistical figures. If we take the ratio of Government’s tax revenues to GDP, China is 19%, while US was 20%, UK was 27%, Germany was 23% and Italy was 30%. Therefore, China’s tax burden appears to be lower than OECD countries.

However, Zhang Jun, a Chinese analyst, regards Chinese companies under heavy tax burden in his article “Are Chinese Enterprises Being Taxed to Death?” He claims that out of total tax revenues, 90% are paid by enterprises, while only 10% are paid by individuals. While in other countries, tax paid by individuals represents a higher percentage. That is probably why Chinese companies think they are paying too much tax (I am just reporting Zhang analysis, but have not verified his claims)

Additionally, the perceived “tax-burden” in China also includes non-tax expenses like social insurance, actual cost of land and financing, etc. Therefore many enterprises regard themselves as being charged more in China than that would be in the US. (Again, it is not clear how Zhang concludes that China is any different from other counties in this respect)

In a more objective analysis, published by Lorenzo Riccardi from RSAasia that compares statutory tax rates, China stands at 25%, very close to Italy’s 27.5%, but cheaper than the US’s 40%. Chinese corporate tax rate, however remains higher than those of the HK, Singapore, UK, Russia and Germany in major economic entities. Despite these statutory corporate rates, local governments often offer refunds, subsidies so that the effective tax rates may vary significantly across companies, industries and regions, (Lorenzo Ricardi)

I refer more in-depth analysis to tax experts, but from my personal experience, I find it Mr Cao Dewang’s argument of “moving production to the US because of cheaper taxes”, not so credible. Still a public stunt to bring the attention to the complexity of the Chinese tax system and sources of government revenues. Perhaps more importantly, Cao’s move seems to highlight the growing overall cost of manufacturing in China. Could that be a pre-emptive strike against Trumps’ threats of rising tariffs?

China often resembles one of those old snow balls that change from summer to winter every time we turn it upside down. Depending when you stop the analysis, you get a different answer that does oscillate without ever converging asymptotically.