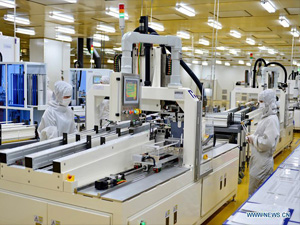 According to Xinhua, China’s manufacturing sector expands for the sixth month in a row. The country’s manufacturing purchasing managers’ index (PMI) came in at 51.3 in January, 0.1 percentage points lower than that recorded in December, according to data released Wednesday by the National Bureau of Statistics (NBS).

NBS statistician Zhao Qinghe said January’s reading remained at a high level since 2012 and pointed to steady expansion of the manufacturing sector.

The sub-index for production was 53.1, 0.2 percentage points lower than that recorded in December.

Zhao attributed the deceleration of production and new orders to the Lunar New Year holiday which slashed work days.

In addition, advanced manufacturing expanded faster than others, as the sub-index for high-tech sector picked up by 1.9 percentage points to 55.7, remarkably higher than other sectors.