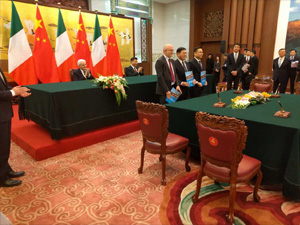 Below is my op-ed about President Mattarella’s visit to China, published today on Caixin (Chinese). Below is the English translation.

The president of Italy is currently in china for an official state visit. From Beijing, he will come to shanghai where I will have the honour to meet him and thank him for granting me the knighthood. This state visit comes at an interesting time for both China and Italy: the two countries are engaging more than before into a commercial dialogue of mutual respect and common interests, trade between the two counties shows good sign of improvement and Italian trade deficit appears to narrow slightly and capital investments made in the past couple of years (Pirelli acquisition by ChemChina, for example) have all helped improve the image that the Italian Business community has of China.

Business deals maybe signed today in Beijing during the business forum and the large political delegation that follows President Mattarella, can go back to Italy showing their electoral basis that they are finally doing something for the economy of our country and, for the first time almost, since Marco Polo day, they understand the importance that China deserves.

The new economic relation between China and Italy must, however, be analysed within the broader international context: the European Union has totally lost the compass and they appear to have lost control of all economic and social problems that Europe faces. While youth unemployment in Southern Europe is in the region of 40% and the U.K. is undergoing the painful process of exiting the European Union, the EU commissioner Juncker is busy giving the media interviews declaring that the “UK will pay a high price for their decision”, as if the EU itself were a creation of Mr Juncker himself and not something that belongs to the citizens. The European Central Bank has lost control of it own monetary policy strategy and does not know how to get out of the hole created by years of quasi-zero interest rates. The society is further put under significant stress by the migrant crisis that no one really knows how to handle, while trade agreements with non-EU countries are decided in Brussels, in general such that they favour only some member countries and not others: in the trade with China, out of 28 EU countries, only Germany and the small Finland, have a trade surplus with China. Many economists in Italy believe that the very presence of Germany in the Eurozone is the reason why the economy of the other countries cannot grow.

It is in this challenging context that China can play an import and useful role. With the departure of the U.K., China needs a new partner that it can trust, help and support and, at the same time, use as a good entry point in the European market. For example, China needs to find a terminal point to its maritime Silk Road initiative and the port of Trieste, in norther Italy, maybe the ideal entry point into the brother routes that could take Chinese goods directly into the freight system towards Northern Europe and even the Scandinavian markets. A much faster route than any other alternative. China and Italy needs also to strengthen their cooperation in the Research and Development area and in the exchanges of Academics and Students, who are at the core of the future of any country.

Amongst the many commercial deals and cooperation agreements signed today, a strong positive sign comes from the cooperation agreement signed between Sant’Anna School of Advanced Studies, Pisa, in the Chongqing municipality, and Bishan District of Chongqing. At the centre of this agreement was the development of an open innovation ecosystem seizing Italian and Chinese talents towards local economic development. The remarkable aspects of this agreement is the fact that the Chinese local government provides the seed fund of the first two years of what could become a new bridge connecting Italian and Chinese science and technology.

Italy needs to redefine its position in the EU and it cannot do it by itself. A little bit of help from the big brother China would be a welcome development.  Even if trade and capital investment would be, numerically, in favour of Italy, China will gain more than it pays in terms of soft power. A win-win situation for all: China needs to improve its image and Italy needs money, that simple. I trust that President Matterella will return to Italy with a host of new exciting initiatives for the mutual benefit of both countries.