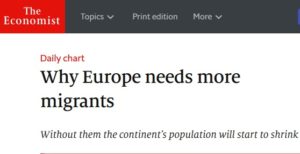 The Economist magazine has just published an article on the issue of migrants in Europe. Why Europe Needs more migrants?

To such an important question, one would expect an equally profound answer, and instead, the article loses its logic and confuses causes and effects in a circularity not worthy of the name of the magazine. The Economist concludes with: Europe needs emigrants otherwise the population decreases…especially in Italy.

In my opinion, however, further considerations must be made which I list below.

1) Incentives for births can stem this trend. The population in Italy is yes, in a trajectory of decline, but much could be done to mitigate this trend. The development of incentive policies for births and greater confidence in the future could certainly give a positive boost. It’s not easy, but one can try.

2) What counts is the GDP per capita, not the aggregate GDP of the country. Even a reduction in the population may not be bad for the economy of a country and the welfare of its citizens. If on the one hand, an increase in population leads to a general increase in GDP, this does not always correspond to an improvement in the GDP per capita, which is the true measure of the well-being of the average citizen. It is therefore important that population growth is a growth of quality, not quantity.

3) Migration has been a positive contributor to the host country when it was controlled and managed. Immigration was one of the cornerstones of the economic success of the United States and China where, in both cases, nothing was left to chance. The US has always managed and chosen who and when can enter their territory and many were the cases of Europeans rebounded on Ellis Island and repatriated. The Economist does not speak about the skills that such migrants should have, which is essential for managing the supply of a country’s workforce.

4) Using migrants to pay for pensions seems to me like a form of racism. There are those who argue that, beyond the GDP and GDP/per-capita, migrants are useful because they can help finance the pension system of the host country. This reasoning is based on the vague hope that before reaching the retirement age, this workforce returns to the country of origin, thus contributing to increasing the funds without then taking advantage of it when needed. This belief has been the argument of Italian INPS’s Boeri that, in short, argued that: so we give them a shove. Now, without entering into a debate on the morality or otherwise of this approach, it seems to me a form of neo-colonialism at home that offends the rights and dignity of the migrants themselves.

5) What is the ultimate priority? Economic growth or social stability? And how to balance these two forces? Leaving aside all the previous objections and assuming that, in the absence of migrants, the Italian population would decrease further, what would be the best way to answer to the question?

I conclude with a recommendation: until we have clear answers to these and many other questions, prudence is a must. These are global processes that must be answered wisely, once a door is opened, reversing becomes difficult.

Also, in this case, China shows us a way forward: Timing and depth of reforms must be carefully thought out.