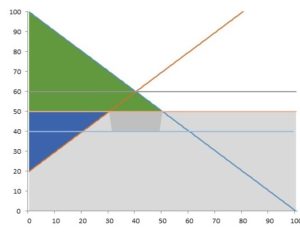 Duties or no duties? Our ruling class must understand one fundamental thing:
Free market is not win-win for everyone, but it creates winners and losers, even the most extreme supporters of commercial liberalismon agree on this. The losers are the weakest, those that the left wing parties should protect.
Losers are those who may have worked for 30 years in an industrial sector and suddenly they are being asked to change sector or maybe move elsewhere because there is a chart in the economic text books of the surplus of consumers and producers that says that commercial liberalism is good for the country “on average”. The weakest are those who have a family, where the wife works in one industry, the husband in another and children in others yet but that, always according to this chart , they should split up so that one becomes an engineer in Germany, the other a farmer in Ukraine and the other a factory worker in Viet Nam. The weakest are those who are in love with their roots, with the medieval villages where they were born, they are in love with the social fabric surrounding them, they are in love with their friends their brothers and their sisters. The weakest are those who do not speak seven languages and cannot tomorrow move from one country to another.
I want to make it clear to everyone that commercial liberalism at all costs leads to this. The winners are the stongest.
A more moderate approach, where we control duties, foreign investment and flows of people, has, yes, the disadvantage of making the economy as a whole grow a tiny bit less, but tends to distribute wealth better , while liberalism tends to increase the “average” wealth by a tiny bit, but create more inequality.
That is the fundamental question that the policy makers of a country must ask. Which of the two approaches to choose. In America the wind is changing and even the Democrats and liberals are asking questions. Yesterday I talked about krugman, today even the senator from Ohio, the democrat Brown said “if we cannot defend our steel today, China will take advantage of it by attacking other productive and employment sectors”. They are starting to understand.
Op-Eds, International Trade, China-EU Relationship, Economic Model