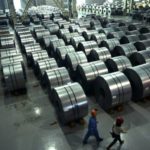 The timing on the imposition of duties on steel and aluminium imported into America from Europe has been postponed. Europe takes time to look for agreements that do not jeopardize its exports, especially from Germany, to the United States. Trump has already made agreements with South Korea, Argentina, Australia and Brazil, now it’s up to the European Union to forge an agreement. In my interview for TGCOM24 an analysis of the current situation for USA, EU and China.

The postponement that the White House offers on the duties imposed in March 2018 on steel and aluminium (respectively to 25 and 10%), clearly offers more time to make a deal, especially with its European allies, which are clearly contrary to the duties.

Rightly, we speak of European allies, but we must remember that the tariffs affect in particular Germany, which exports steel to the United States for a value of 3-4 times higher than Italy. Rightly, for once, Germany raises its voice and tries to find support from other European countries. As for the United States, they do not have a great interest in putting tariffs on Europe, but because the rules of the international trade do not allow preferential  treatment between Europe-USA and China-USA, because Trump wants, or at any rate intends, to put tariffs on imports coming from China, it has to put them even for those coming from Europe, in our case from Germany. This extension is a way of trying to get to an agreement between European states and America. Keep in mind that, when we speak of European countries, we refer mainly to Germany, because if it were not that the latter to export 3 billion worth of steel to the United States, perhaps in Europe we would have left this subject undiscussed.

Of course, because we have a privileged relationship with the United States, we are political and economic allies. Let us also remember that United States’s average import tariffs are only 3%,  while for Europe it is 5%. So, from a technical point of view too, Trump is right to complain, because he says: “In Europe, for various reasons, you have protectionist  policies on agriculture and other industrial sectors, you have duties higher than what we have in America, however, if we are partners we must be on an equal level”. Trump basically tries to fill this gap between 3% and 5%. Trump knows very well that tariffs do not help to reduce the trade deficit of 150 billion we have talked about, but it helps to protect at least temporarily, for a limited period, some categories of workers, especially in the mid-west, who are particularly sensitive to this phenomenon. My vision is that this trade war will not be very serious in the end, because rationality will prevail. We should also pay attention to the other side of the coin, there is perhaps too much emphasis from those who argue that the global trade has brought great benefits. It must be said that some benefits have been brought, but accompanied by disadvantages to certain categories of workers and to certain countries. It’s not clear, we always have to gains on average, but winners and losers are always there, even hidden inside the averages. Trump is now trying to protect those who, in America, have been left behind, disadvantaged, even at the cost of paying the price for the American economy as a whole.

Professor Geraci, you are live from Shanghai. What about China? what is the response regarding this issue?

Obviously, China has duties three times higher than the American ones. The average duty for goods arriving in China is around 9-10%, compared to 3% of goods entering the United States. Moreover, China does not export large quantities of steel to the United States. We have seen, in the last few weeks, that China has imposed duties on goods worth 60 bln USD, out of a total of about 150 billion, so this is not a huge amount. It must also be remembered that, contrary to general belief, only 40% of the Chinese economy depends on trade. On the contrary, the Italian economy depends a lot more on trade. In China, the incidence of trade, including imports and exports, is about 40% of GDP, in Italy those count for 60%. China is one of the countries where the impact of international trade has a very low percentage compared to many other countries, such as the BRIC countries, Brazil, India and Russia, which are dependent on exports. So, as sometimes appearance matters more than facts, China is playing on the media clamour. If Trump imposes duties, even Xi Jinping must have a say, but in the end, there is no real concern about a trade watch