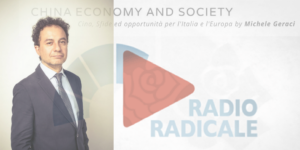 Interview on RadioRadicale, together with Valeria Manieri (Radio Radicale), Francesco Radicioni (expert of Asia) and Eugenio Buzzetti (collaborator/correspondent of Agi-AgiEsteri). What is the future of the “trade war” between China-US? and what are the prospects for the EU? Why will China reach us in a few years? What should Italy aim for? Here are some answers…

At what point are we far from the possibility of a trade agreement between China and the United States? How relevant are the issues related to the tariffs that should enter into effect on June 15?

G: I think the question is deflating with its times, not always linearly, with recessions, enlargements, but I think that as I had predicted from the beginning, this type of war has been used as a negotiating tool for other things. We have seen as a parable, we got through the threats and then the relationships settled. The ZTE one is an interesting case because it had been banned from making purchase agreements, whereas it is slowly turning out in a different way. Even today, China has declared that it will buy more US products,  we do not know how much it is exactly talking about, as it is difficult to understand if the announcement refers to previously declared numbers or if they’re new data, however, we are talking about tens of billions of dollars more, $50/20 billion, certainly not the 200 that Trump says he wants to obtain from China, he knows very well that it is not possible and I think it’s not even his goal. China holds out its hand, first with the agricultural products, then with $50 billion, then the situation with Korea. It is not a simple commercial war between the two, in order to reduce the trade deficit of the United States, but a political means for Trump to speak to its electorate, he takes some actions to stimulate China, then the latter replies and soon afterwards and lastly, it pulls back. Maybe, Europe may have the biggest problems. The EU does not know how to handle this situation and now it finds itself between two fires, it is in serious difficulty because when it comes to negotiating tariffs, it is necessary to put together 28 different countries and opinions. 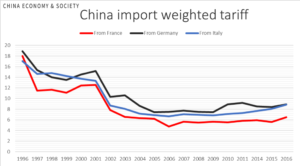 It is, thus, a difficult task, and it is impossible to make everyone happy. My main concern is how and who will raise their voices in Europe, but it will be difficult to do not penalize any country. In the end, I must unfortunately say, Italy always makes the pot, because our position is often exploited, and this leads to disadvantages of course since there are no internal redistribution systems of wealth, in the EU. My main concern is: what is the role of Europe in this chessboard?

I would also like to consider the problem on the other side, for US tariffs on European steel and aluminium exports …

G: Germany, which exports 3,000 billion steel to the United States while Italy is less than 1/3, is interested in this problem of the tariffs on steel, not in the interest of all European countries, but rather in the interest of its German companies producing steel and which would be affected by these tariffs. This is a crucial case because we can better understand that even if we would like to export, however, the issue of tariffs does not have a great impact.

Brussels recently involved the WTO, we’re waiting to see some developments. There was a research, that indicates $7 billion losses for the US and $4.5 billion for Europe, because of the tariffs. What do you think?

G: It is necessary to see the concentration of these losses, in which geographical area and in which sector are these lost? These losses calculations are very difficult to do, it is difficult to quantify the total value of the penalties. The truth is that you do not know because there are too many variables. For example, it was necessary to calculate the advantage of Italy after entering the Euro, the estimate was 0.5% of GDP, not big numbers, but neither are estimates easy to calculate.

China has also had a GDP growth thanks to the opening-up to global markets, but it started naturally from a very different situation if compared to the Italian one at that time, indeed we had a lower growth rate. To call into question the two countries, China-US, even if they impose tariffs, these will certainly not bring down the Chinese or American GDP of 2%.

Tariffs and European policies with respect to Russia, there are geopolitical issues of human rights and more that directly affect Europe, and that are part of the cultural values of the European countries.

G: In game theory, there are strategies that don’t really stand still, for this reason, there is an initial parable. I’m taking into account the average, of course. While in some cases, tariffs bring value and advantages to small areas, to a region, to an industry or company.

There are analysts saying that it is all about the American vs. China trade surplus, but there are also some others who place more emphasis on the strategy, which would block the 2025 china manufacturing plan, thus, the strategic sectors of technology, such as big data, AI, space race. These are all sectors where Beijing is aiming at, in order to make that switch from low added value and to a higher value. What do you think about this interpretation?

G: It is a very dangerous weapon because it is true that there may be the will to limit the Chinese success, but we should beware of the acceleration in its development process, which these actions would call. China would take a blow for sure in the short run, but then, in the long term, it would accelerate. The consequences will be an unrecoverable situation. We should remember that one of the reasons why it is now at the forefront, it is also because it started to produce by itself the components that it asked and that had been blocked, becoming even more efficient than the US. This is a very difficult trade-off, so I think that imposing duties, in order to block CM2025, accelerates its growth. Moreover, China invests 2.8% of GDP in research and development, beyond what Italy and Europe can actually do.

After the ZTE case, we were just talking about, the Chinese press in Beijing called again for self-sufficiency, as for the production of microprocessors. It seems that China is preparing to go towards self-sufficiency, almost autarchy.

G: There is almost a historical desire to reach for self-sufficiency, by the Chinese counterpart. For this reason, there have been many efforts also in agriculture, to improve production per hectare, and China has also been a pioneer for the use of fertilizers. China has the ability to respond and in the long run, we will face serious problems because we do not have the capacity to react to the magnitude of this phenomenon, China makes 50% of everything that is sold in the world, exaggerating. For what concern the costs and its economies of scale, it is impossible to compete. In the future, China will be the country that will produce everything better than other countries, for this reason, we should do something else. For the time being, we still endure, for example in the innovation and creativity sectors, which I consider the future sectors where we must invest in, for the coming years.

However, Richard Freeman said that there is a piece of the European industry and European research that is extremely advanced and can enjoy a little breath.

G: Of course, I agree with him. Indeed, I do not think that tomorrow we will find ourselves overwhelmed by China, we have some inertia and technological skills that China wants to buy, and when they buy it owns it. Of course, there is still some decay time, but it is not everlasting and there is a continuous exchange of skills, so these risk to become the more and more Chinese ones. Even in the fashion industry, we see now that there are many Chinese designers, who compete with ours. They do not have the brand or the name popularity, but it is indicative of how the gap is shrinking. All Chinese society evolves and with great speed. So, we have the skills but they will not last forever, with the new government we should see what to do in the next 5 years, it is very important because they coincide with the conclusion of the China Manufacturing 2025 plan. So it will be in 2023 when we will come to terms with what Italy would have done and what China has done. I would appreciate that Italy starts making something and accelerate, so as not to lose ground.

After the meeting between Kim and Xi, Trump confirmed the summit in Singapore, what do you think?

G: I would say that it is the triumph of Trump’s strategy, which is random and displaces, but in the end, it reaches the goal. I think it will be done because it is in everyone’s interests and in Trump’s strategy. Trump is pushing China to send Kim back to the international network. Win-win for everyone. My prediction: let’s see who will take the next Nobel Prize for peace among the three…