As a main pillar for growth, consumption was driven by housing market-related spending between January and September. This category includes spending on home renovation materials, furniture and autos, with sales of these items up 15.5%, 14.2%, and 9.1% respectively year-on-year.

Fixed-asset investment (FAI) increased 8.2% in the first three quarters of 2016, year-on year, as the government’s expansionary fiscal policy and public-private partnership (PPP) financing encouraged new projects. Infrastructure investment was a leading target for FAI, rising 19.4% year-on-year, while private railway investment increased by as much as 17.6% from the same period in 2015.

Change is in the wind, as policymakers have taken measures designed to cool the overheated housing market. And the expansionary fiscal-policy focus has shifted to fiscal infrastructure projects. However, because the real estate sector contributed as much as 6.5% to third-quarter GDP and contributed significantly to local government revenue streams, it’s unclear whether these shifts will go far enough to sustain the latest growth momentum into 2017.

The lending boost suggests credit access for infrastructure spending is likely to have increased, while mortgage loans continued rising at a strong pace. Subsequently, the aggregate debt ratio for the nation’s property developers rose to 76.9%. And risks emerged in the household sector as investments tied to wealth management products found their way into the property market.

As steady GDP growth remains the government’s top priority, though, current trends suggest any moves toward deleveraging and structural transformation will not be easy.

Neither China’s balance of payments nor purchasing power parity status provides a fundamental reason for the yuan to weaken substantially.

So far, China continues to enjoy a current account surplus. For the first nine months of the year, the merchandise trade surplus stood at $396.4 billion. September’s 10% year-on-year export decline was tied to lackluster global demand and a rise for protectionist trade policies. Nevertheless, China’s share of the world export market has been rising for the past five years.

From a financial perspective, expectations for a U.S. Federal Reserve rate hike in December and asset price bubble formation in China are contributing to a short-term weakening of the yuan against the U.S. dollar. As of Oct. 28, the yuan-dollar fixing rate had fallen to 6.785, the lowest in six years.

Going forward, we expect the yuan to weaken further, reaching 7.3 to the dollar by the end of 2017. That’s because the Chinese government has limited policy options, beyond maintaining existing measures, to rationalize capital flows, deflate asset bubbles, and prevent risk from spreading through property, forex, debt, and equity markets.

Inflation and Housing vs. Monetary Easing

September’s 2% year-on-year increase in fuel prices gave a boost to the broader, non-food inflation rate, which registered a 1.6% increase. In addition, the producer price index increased 0.1% year-on-year in September, which was the index’s first jump since February 2012.

The coal industry’s ongoing consolidation, which is aimed at checking overcapacity, contributed to a supply bottleneck. The consolidation has also pushed coal prices higher since June. Meanwhile, global prices for commodities such as iron ore have rebounded substantially, arguably because of a rebound for Chinese demand.

Worldwide, inflationary pressure also appears to be rising, as the core CPI in September in the United States exceeded the Federal Reserve’s target, hitting 2% year-on-year for the 10th consecutive month. The CPI in Britain, meanwhile, in September reached the highest level since November 2014.

Expansionary monetary policies worldwide may continue to support a commodity price rebound. Although China’s headline CPI was relatively benign in September, government attention is needed in the face of a month-on-month increase in core inflation, a revival for PPI inflation, and expectations that housing rents will rise, given that rents can reflect property prices overall. Any one of these factors could push inflation higher in 2017.

Cutting coal and steel production capacity was one of the government’s key policy goals for 2016. Some 30% of the overall target was achieved in the first half of the year, but progress accelerated in the third quarter, with more than 80% of targeted capacity elimination completed by the end of September. Meanwhile, commodity prices have climbed to the point where coal- and steel-producer profits have risen on the back of improving demand.

Steel and coal prices increased by more than 32% and 55% respectively between the end of 2015 and Oct. 24. But concerns about wintertime bottlenecks for domestic coal supplies have prompted the National Development and Reform Commission to arrange for the country’s more competitive mines to expand production — a step that underscores the government’s sometimes conflicting goals. 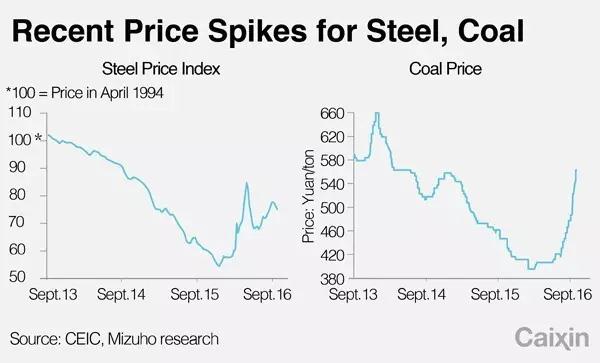 Coal and steel prices rose sharply in recent months after the government ordered the nation’s mines and mills to cut capacity.

In our view, government stimuli have produced significant results in terms of stabilizing economic growth, especially when this year’s growth results are compared with last year’s.

But there’s another side of the coin. Leverage has contributed to a housing market bubble, and inflationary pressure is rising. Both of these predicaments require close attention. Proactive risk-control policies, as well as structural reform in areas such as state-owned enterprises, fiscal budgets and taxation — not boosting GDP growth — will be critical issues in 2017.