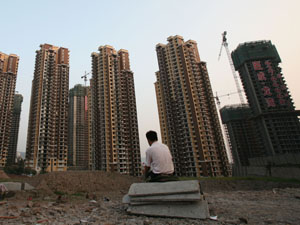 In the last forty years, China has achieved an unprecedented economic and social success. This success is based on 5 main pillars that we, in Italy and Europe, should study well to understand the challenges and opportunities that China presents to us. The 5 pillars are:

Beyond the ethical and moral judgment that can be expressed about these types of policy, the fact that China has managed to achieve its objectives remains a reality and the number confirms this: in the last 40 years there has seen GDP growth, of almost 10% per year on average, the nominal income of both rural and urban citizens has increased by about 100 times, poverty has been eradicated for 800 million inhabitants, combined with the development of infrastructure and the modernization of an economy that had been left in a disastrous state by the cultural revolution of the 1960s and 1970s. An economic miracle that is unprecedented in the history of humanity considering that 1.4 billion people live in China.

What can we learn from China? What are the economic and social policies that could be implemented by us and bring us some advantages? What policy should we follow? Should we keep on opening up to commercial liberalism, an ideology dictated by a school of thought that I summarise with “Pro Europe, Pro-Market, Pro Euro,” or shall we take a pause of reflection and look at how the state-controlled economies have achieved their goals? Because it is with them that we will compete from now on, with more or less equal tools.

Let’s briefly look at each of these five pillars that China has implemented over time and the results obtained.

In 2011, China became part of the World Trade Organization (WTO) with the promise of lowering tariffs over the following 15 years, which only partially occurred. However, as of now in China the duties for imported goods are over 8%, almost three times what is in the United States (2.8%) and much more than double that in Europe (3.1%). Thanks to the control of duties control the trade surplus in China has grown exponentially contributing to the growth of GDP and the accumulation of monetary resources in foreign currencies that peaked at about four trillion dollars in 2016. 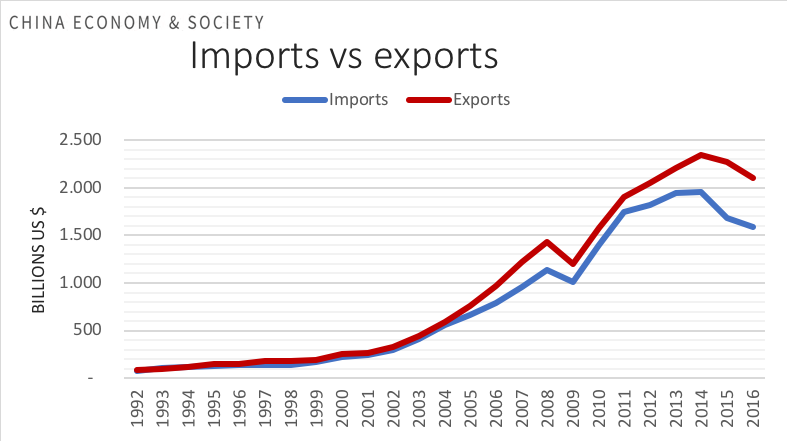 In 1958, China has adopted the Hukou registration system used to categorize citizens in two different categories: urban residents and rural residents. From that time on, the migrations from the countryside to the cities were planned and, like a valve, the rules that allowed migration became rigid when the cities could no longer support the flow, and lighter when the cities needed some new workforce. In this way, China has, inter alia, been able to regulate the increase in workers’ wages by acting on the supply side, so as not to fall into the “middle income trap”. 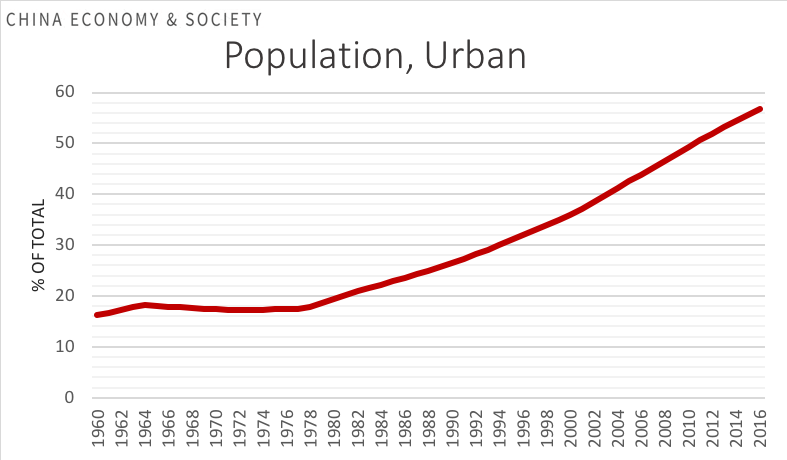 Among the most controversial social policies carried out by the Chinese government, there is certainly the control of demography through the one-child policy, which has shown how harsh the conflict between the interest of the community and that of the individual can be. From 1950 to 1980 the Chinese population grew from 540 million to 980 million. At that point, the government understood that no matter how high the growth of GDP could be, the per capita GDP growth would have suffered and therefore worked on the denominator of the equation. In 1982, the one-child policy for urban families was introduced, with some exceptions, for example farmers could have a second child if the first-born child was a girl. The fertility rate has from then on decreased from 2.6 to 1.6, population growth has slowed down and, recently, the policy has been relaxed; to date, all citizens, without distinction of residence, can have two children. Contrary to what one might be inclined to think, ethnic minorities (Tibet and others) were allowed to have two or even three children. 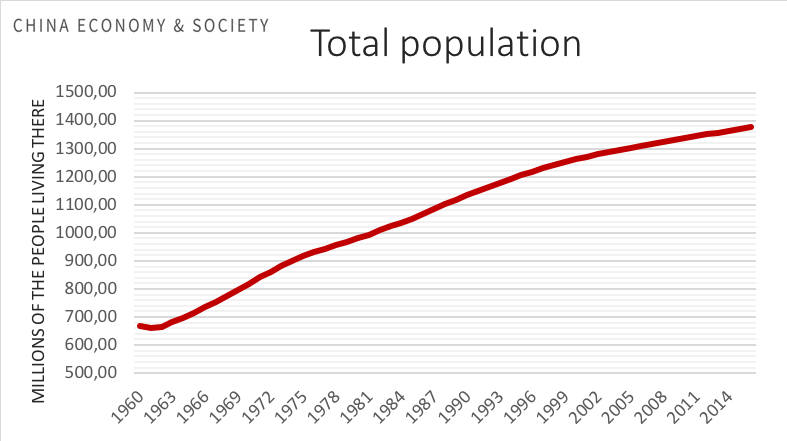 The Chinese central bank (PBoC) has always controlled the exchange rate of its currency, maintaining full control of monetary policy. Because of the Impossible Trinity, in fact, it had to keep the flow of capital, which entered or left the country, closed. The controlled exchange rate allowed for the boost to exports that rose from zero in 1978 to a peak of $ 2.3 billion in 2014. The export revenues were used to buy from abroad the raw materials, technological know-how and human capital that China needed and which transformed the country’s industrial fabric. The result was that as if, by magic, China transformed cotton t-shirts and computers (which it exported) into a high-speed railway network of 25,000 km. 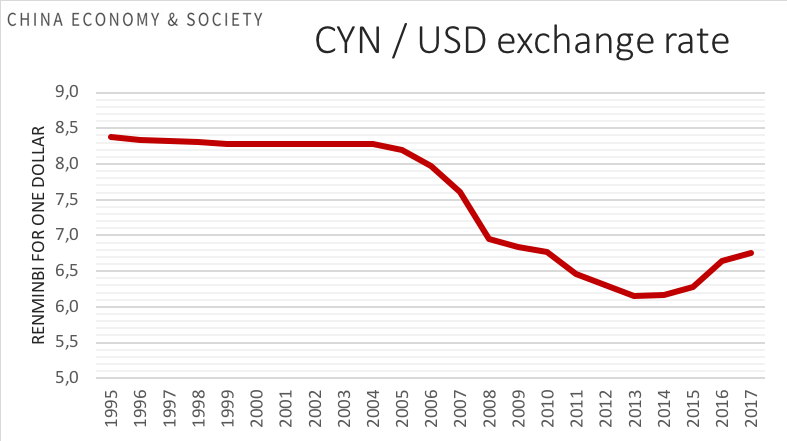 While many observers focus on the way China has kept control of the exchange rate to favour exports, on the other hand, there is very little talk about how interest rates control has instead been used to give further impetus to economic growth. The rate curve for government bonds is what I call “the mother of all curves”, the basis on which all other assets are priced. In a balanced economy, yields should be close to nominal GDP growth, a bit like us in Europe, low growth and low rates. In China, on the other hand, rates have always remained far below GDP growth and this gap has been a sort of subsidy that the government has provided to companies, which have been able to invest much more freely, as the cost of money has been relatively low. The interest rate transmission mechanism on the real economy, combined with the high incidence of investment in China’s GDP (around 50%, much higher than any other country, including BRICS), has meant that economic growth could reach that 10% per annum for 40 years. 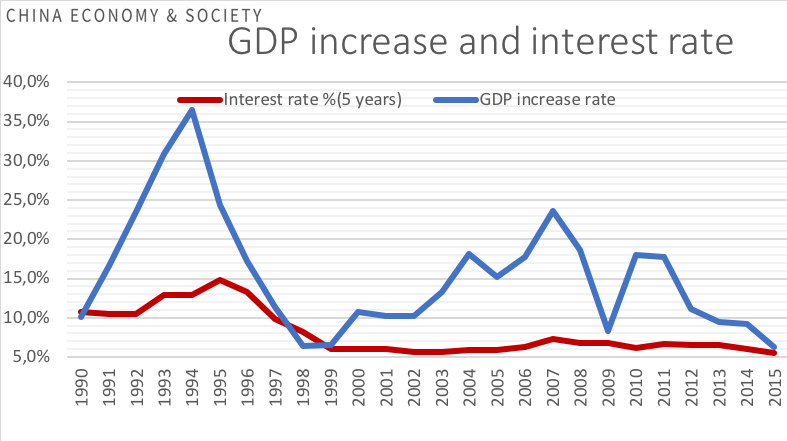