Italy out of euro next? 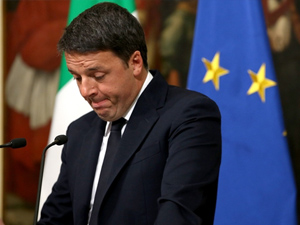 Below is my view about the result of Italian referendum, published today on Caixin (Chinese). Below is the English translation.

The people of Italy have rejected the proposed changes in the Constitution by a large margin. The Prime Mister, Renzi, the main supporter of this reform has been defeated and has resigned. Italy now has no government and the President, Matterella, will need to think very carefully to whom to assign the role of the new Prime Minister. Since 2013, the three Prime Ministers, Monti, Letta and Renzi, have not been selected by the people with direct vote, rather they have been appointed by the President, in response to emergency situation. The last elected Prime Minister Italy has had in the last several years is Berlusconi.

Renzi, a young man in his forties has committed a grave mistake by insisting so much on this constitutional reform that was in no way necessary nor would have it solved any of the problems that Italy faces. The former Prime Minister, not elected by the people, has instead chosen to use this referendum in order to prove that the people of Italy did, nevertheless, support him. They didn’t. Renzi chose the wrong battle to fight, a battle whose terrain was full of obstacles, intricacies. The text of the proposed reform was so complex and full of lengthy passages that, clearly, the average Italian citizen could not really understand. And when you don’t fully understand something, you can’t get out of bed on a sunny Sunday morning to go a show your full support. Renzi committed a grave political mistake:  having learnt nothing from the mistakes committed by Cameron, he too embarked on seeking some kind of personal investiture that never materialized. Because of Cameroon, the UK is in the process of exiting the EU. Because of Renzi, Italy reforms have experienced a halt and the country enters a period of great uncertainty.

What’s next? Exit from the EU was never an issue and it won’t be now. Italy’s position in the European Union is not in question, just yet. However, its presence in the Euro zone is indeed uncertain. The two alternative parties, the Northern League and the Five Star Movement are now in a much more favorable position to launch a new referendum that would ask Italian people whether they wish to remain in the Eurozone. The Euro has greatly damaged Italy and destroyed its middle class. Average income is now at the levels of 20 years ago and for the first time in history younger generations are poorer than their parents. Youth unemployment is at around 40% and young people have limited hopes to find jobs. With ease of travel and better growth prospects in Asia, the smartest young Italians simply get on a plane and seek fortune elsewhere, thus leading to a very dangerous demographic shift that sees the brightest people leave.  This makes it almost impossible for the economy to grow. The existence of the Euro ties up the government to the European standards and does not allow for the necessary monetary and fiscal policy that Italy needs now. The Government budget is tight and does not allow for large deficits, which is instead what Italy needs. Government Deficit is, roughly, private sector income, but people don’t seem to understand this very well. As an example of the damage done by the Euro, during the Greek crisis, former Italian Prime minister, Monti, who had replaced Berlusconi – with the ‘support’ of Europe – will be remembered for transferring the debt of German Banks towards Greece into the balance sheets of the Italian banks, who are now experiencing a crisis. A second effect of the Euro on Italy has been an almost overnight inflation of 100% that doubled the cost of living pretty much everywhere, thus completely devastating the purchasing power of the average Italian family. At that time, scholars and academics, with no real understanding of the reality were appearing on TV talk shows to argue whether inflation was 2.5%, or 2.49%, in ridiculous attempt to distract and confound people.

People in Italy now need to show if they are ready to pay a price for having slept for 15 years. If they re-introduce a domestic currency, this will bring negative effects in the short-term but, hopefully, long term structural benefits. As usual, sacrificing the short-term for the long-term is not politicians’ favorite game. So, whoever comes next, will do nothing to solve the situation. I would not hold my breath waiting for the savior.