Morgan Stanley not too worried about China’s rising debt 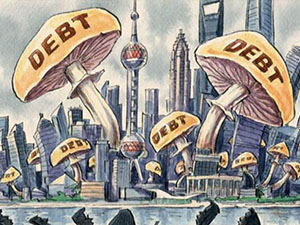 In an op-ed written by Morgan Stanley, Global Researcher Chen Aiya, re-affirms his confidence in China’s ability to deal with its increasing debt. The debt/GDP ratio had increased from 147% in 2007 to 279% in 2016, showing that in order to achieve 1 percentage point of GDP growth, there has to be a 6 percentage point growth in debt.

I often encourage analysts to look at China as if it was a firm and estimate the usual profitability ratios used in Corporate Finance. In the case of China’s debt and GDP growth path, one could say that its ROC is declining, but still respectable. This decline occurs because current Chinese growth model is based on investment to drive GDP. Morgan Stanley, probably worried about this decline on China Inc’s profitability, has decided to decrease their portfolio’s exposure to China.

However, as typical for Investment Banks seeking business, there is always a positive spin to any story. MS still believes that China can handle well with the massive debt and avoid financial crisis. On one hand, the total debt is due to domestic investment, the current account is still surplus and that external debt is limited. On the other hand, Chinese foreign outbound investment is positive and accounts for 16% of GDP. This is not the same as with other emerging market economy, where their foreign investment cannot balance the inbound capital flow. Additionally, the Chinese Central bank can use moderate measures to alter the debt structure. Most importantly, government can now accept the even lower growth rate, trying to make nominal increase rate equals to real increase rate or, same thing, a zero deflator.

Over the next 10 years, Chinese investment will flows into service industry and high value-added industries. Although the growth rate may slow down, China should be a high-income country by 2027.