What do the agrarian reforms of the 50’s have in common with the income of current citizenship?

The economic impact of the reform

One last plausible mechanism of persistence is economic. The reform may have changed voting through its impact on the economic structure of reform towns. For instance, land redistribution may have changed production, expanding social classes more likely to vote for DC. Alternatively, the reform may have made voters wealthier, turning them into petit-bourgeois voting for conservative parties (cf. Di Tella et al. 2007). We do not find evidence for any of these explanations. First, in the 50 years after the reform, towns at the border have similar levels of income and wealth (proxied by home ownership). Second, the economic and demographic structure of the population is similar across the border for the entire period. Third, economic activity and sectoral composition were not affected by the reform. Finally, when in 1994 Berlusconi’s Forza Italia replaced DC as the major Italian conservative party, we do not observe greater support for Berlusconi’s Party in reform areas. This result speaks against reform towns becoming more conservative in general, and is consistent with stories that are able to explain support for DC only. Taken together, these results suggest that the economic effects of the reform are unlikely to explain its persistent electoral effects.

The 1951 Italian land reform illustrates how large redistribution policies can generate lasting electoral gains and create the conditions for ruling governments to cultivate political support for many years. A comparison between our results and other studies (Bechtel and Hainmueller 2011, Zucco Jr 2013) suggests that redistribution of (productive) assets can have more enduring effects than cash transfers. Our results also suggest complementarity between the initial large-scale investment (the land reform) and subsequent investments (brokerage of grassroots organisation, fiscal transfers, and public sector employment). Because grassroots organisations and favouritism in the allocation of public resources are common around the world, our results may offer general insights into how these systems come about and persist over time. 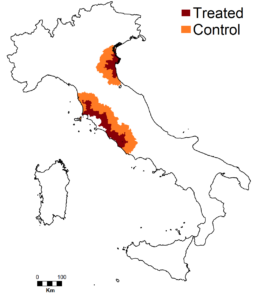 Continue the reading on the original text by Bruno Caprettini on voxeu.org