EU-Asean. The free trade of goods

A comparison between the operating modes of the European Union and those of the ASEAN countries.

Obviously, because the alternative: “No, the existing model today represents the optimum” – would betray an excess of confidence and a lack of willingness to re-examine and, where necessary, improve the model. However, it is not uncommon for various Brussels officials to respond to this question with a sharp “TINA” – There is no alternative. We scholars, on the other hand, ask ourselves the question every day to try to understand the areas that need attention because sometimes a step backwards or simply stopping to reflect is, in reality, a step forward. But in Brussels, the belief is Ever closer integration, without anyone ever explaining why – in fact, I correct myself: at a dinner, a representative of the European Commission, after a heated debate on the economic benefits of the Euro, the common market, the re-distributive effects on income, on the increase in poverty, the decline in living standards, suddenly told me: “Michele, do not you understand: the economic well-being of the European citizen citizens is a secondary goal that needs to obey the political objective to create a European State. If people get poorer along the way, so be it “.

With this premise, today I want to talk about the free market of goods, one of the four pillars of the European Union, together with the free movement of services, capital and citizens. In particular, I compare the operational modalities of the European Union with those of the ASEAN countries, the ten countries of Southeast Asia, which have also set up an economic free trade area: ASEAN Economic Community – AEC – but with fundamental differences.
In short, the European Union has adopted a model of a customs union with a single tariff and free movement of goods within. The EU imposes duties on the borders of the Union for goods imported from third countries to be received by all member countries. While, goods produced within the Union can be exported to other EU countries without duties.

Asean has instead adopted a model of a free trade zone with the rule of origin and leaves every country free to impose the duties it wishes for products imported from third countries, not part of the AEC – always respecting the rules of the WTO. However, these goods, if re-exported to other countries of the AEC, will be subject to duties. On the contrary, only goods produced within the AEC area, for at least 40% of the added value, can freely circulate among the ten countries. The table below illustrates these differences.

What are the advantages and disadvantages of one and the other approach?

To answer this question, I use data and slides (AEC Cambridge EU vs Asean) of my friend Professor Claudio Dordi, an International trade expert, who teaches at Bocconi, as well as Team Leader of the multi-lateral EU-Vietnam project which led to the signing of a free trade agreement between Vietnam and the European Union. Thus, a person who understands the issues and looks at the problem from his privileged observatory in Hanoi.
He highlights how an EU model, if applied to the ASEAN countries, would have, on one hand the disadvantages, such as the great economic differences between, for example Singapore and Laos, and the low degree of commercial integration in the ASEAN countries, where the value of intra-area trades is only 24% of the total against 50% of the EU. In other words, the European Union is more commercially integrated. On the other hand, if the ASEAN countries adopted the EU model, there would also be advantages, since all the economies of Southeast Asia have high growth rates and levels of capital investment. More importantly still would be the elimination of Non-Tariff-Barriers (NTB), which still exist among the ten ASEAN countries, non-tariff barriers which, in the end, are those that still, despite the almost total absence of duties, make business difficult. For more complete information on the economic and legal functioning of the ASEAN area, I refer you to the complete set of slides by Prof Dordi. 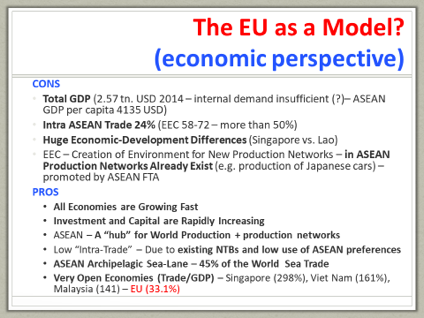 My last consideration is about the advantage that the ASEAN countries have towards EU countries, in terms of commercial flexibility towards third countries, not belonging to the area. The great difficulty that exists in Brussels is precisely to draw up a list of duties for all imported goods, which all 28 countries must adopt. 28 countries that have economic structures different from each other and where the lack or excess of certain goods cannot be the same in all countries. A uniform policy of duties tends to mediate different needs and, as often happens, it makes everyone unhappy. The ASEAN solves this problem by applying the rule of origin, and only goods produced locally are subject to free trade, leaving every country the freedom to impose duties on goods imported from third countries (in compliance with the WTO rules). However, the price to pay for this differentiation in the treatment of goods is the presence of hard or soft of borders between countries. In Europe, borders have naturally been cut down to allow free movement of individuals, a great achievement of the EU. But, a small check, from time to time, on the origin of goods passing through the 28 borders would not be bad… a soft Schengen for trade!